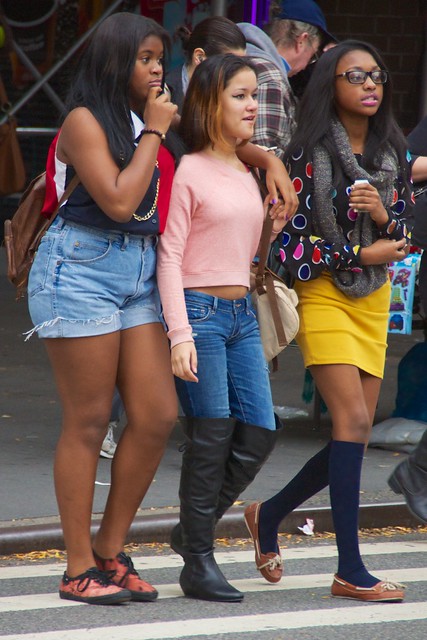 Are you as careful as you should be when you cross the street? (Ed Yourdon / Flickr)

If you’re aged 5 through 19, unintentional walking injuries are the fifth leading cause of death. Not good.

You’ve read about the four leading risks on the streets. Now it’s time to see how well you know them. Quiz yourself:

Walker
Jaywalker
Someone who has the right of way
Blind spot
Pedestrian is just another word for walker.
2

At what time of day should you pay extra attention to your surroundings?

Morning rush hour
Afternoon rush hour
Night time
It's true-- when the sun goes down, things get a lot more dangerous. There's less visibility. So take off those sunglasses-- because at night, they're dangerous and lame.
3

How often is a teen pedestrian killed or injured because they were hit by a car?

Every hour
Every two hours
Every 10 minutes
Which is why this is such serious stuff. So before you cross the street look BOTH WAYS.
4

As fast as you can
Mid-block
It's an open secret that sometimes it's safer to cross mid-block than at the corner. Just use good judgment.
5

1,000 teens were surveyed. How many said they've been hit or nearly hit by a moving vehicle while walking?

What percentage of teens hit or nearly hit by a car said they were texting?

12 percent
15 percent
18 percent
Look up from that phone and take a break from walking if you need to shoot a text. A couple seconds could save your life.
7

The 'Do Not Walk' signal is flashing. Is it okay to enter the crosswalk?

Yes
No
What if you drop something, like your phone and MetroCard, and need time to pick it up? Better to wait for the next 'Walk' signal.
8

What's the most dangerous night for kids as pedestrians?

4th of July
New Year's Eve
Halloween
Probably because there are so many kids AND adults out that night. And many can't see clearly because of their costumes. Collect your candy and stay safe.
9

How many crosswalk buttons in New York City actually work?

45 percent
72 percent
9 percent
Which is why you need look both ways before crossing, no matter WHAT the crosswalk signal says.
10

Texting and walking is dangerous, but so is walking with your headphones on. How many teens got hit/almost got hit with those on?

57 percent
47 percent
37 percent
TAKE THE HEADPHONES OFF. At least when you're crossing the street. Take in the noise of the city... enjoy it! Listen to music while you're on the subway.